The Weeklong for Advanced Focusers

The "Advanced and Certification Weeklong" is the flagship event of The International Focusing Institute.

See details of the 2022 Weeklong

A BIT OF HISTORY

The earliest predecessor to what we now call "the Weeklong" took place in 1978, several years before The Focusing Institute was incorporated.  The Weeklong allowed people from all over the world to learn Focusing directly from Gene Gendlin and those whom he had directly trained.

In the 1980s, the Institute began to offer certifications for those who wanted to teach Focusing to others. To receive a certificate as a Trainer (now also called a Certified Focusing Professional), one was required to attend the Weeklong.

The earliest Weeklongs were led by Doralee Grindler Katonah and Reva Bernstein.

In this video, the ones who developed the Weeklong in its early years recollect how it all began.
00:00 Doralee Grindler Katonah 06:22 Mary McGuire 10:50 Jim Iberg 12:58 Bala Jaison 18:06 Ann Weiser Cornell 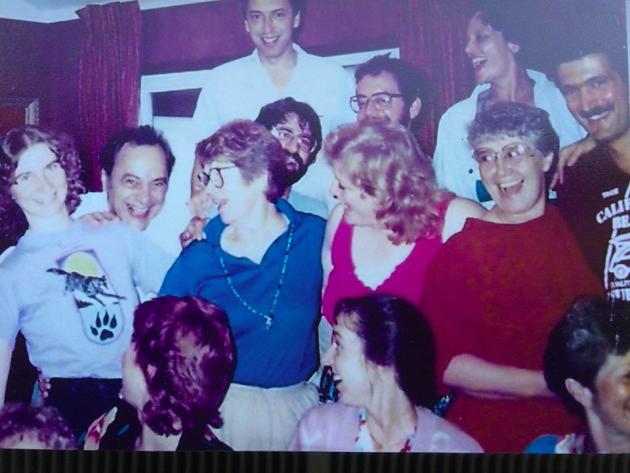 Image: Gene Gendlin on left and Mary McGuire on the right, with certifying class of 1988

The next phase came in the mid-1980s when Mary McGuire became Director of the Institute and she led the Weeklongs along with Bala Jaison.  Janet Klein became one of the leaders in the 1990s.

In the 1990s, the Institute began to name advanced teachers as "Certifying Coordinators," who could offer certification in Focusing through the Institute without the students being required to attend the Weeklong.

By the 2000s, the Weeklong teaching team began to include a wider range of outstanding teachers such as Jim Iberg, Kevin McEvenue, Paul Huschilt, Dieter Mueller and Robert Lee.

In 2010, a "Crossing Support Group" was formed.  This was a diverse, international group of emerging teachers who envisioned a new way forward for the Weeklong. 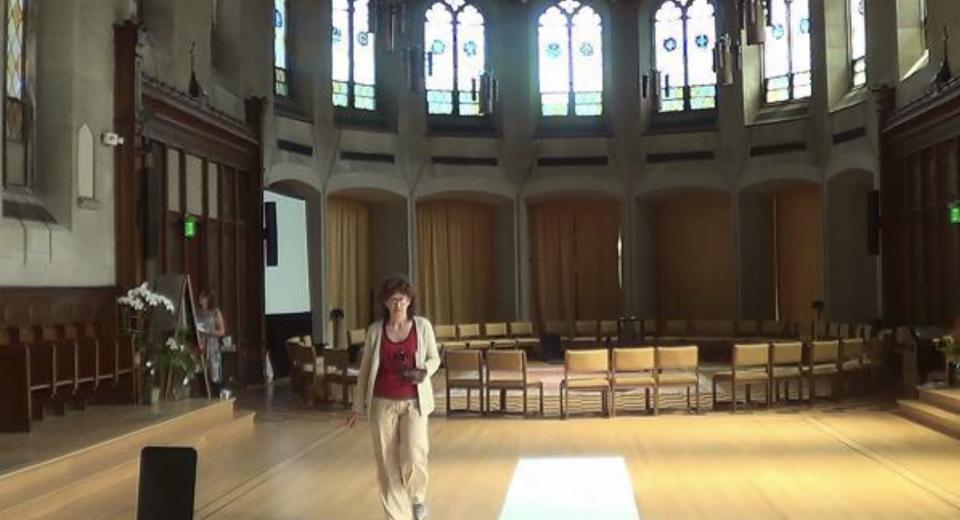 Image: In recent years, the Weeklong was frequently held at the Garrison Institute in New York.

As a result, attendance at the Weeklong is no longer mandatory for anyone, unless a certain Coordinator makes it a requirement for their students. However, the Weeklong remains intimately tied to certification: 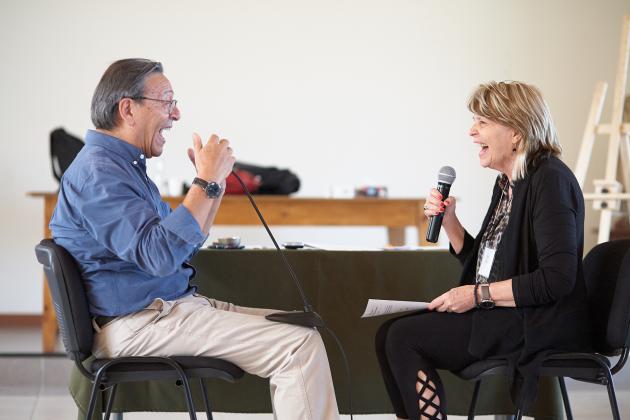 Image: Edgardo Riveros Aedo and Jan Winhall leading a workshop at the Weeklong in Punta de Tralca, Chile, in January 2019.

The Weeklong is an opportunity for all those who are advanced in their Focusing training to come to sharpen skills, to broaden their knowledge, and to join the vibrant international community of advanced Focusers. It is different from other Focusing conferences or events in that it is intended as a whole shared experience for those advanced in their study and practice of Focusing.

It is led by a Core Team of 3 Coordinators, who each serve for 3 years.  They are supported by several Collaborating Coordinators, who serve one year as leaders of Home Groups.  We do our best to have representation on the team from many styles of Focusing and from many parts of the world.

See a report on the 2021 Weeklong in our August 2021 In Focus newsletter here.

The Weeklong is intended for all those who are certified by The International Focusing Institute (TIFI) by the start date of the Weeklong.  Coordinators are especially invited to attend and receive a discount off tuition.

Your attendance is a special chance to connect or re-connect with our diverse international community.  Many participants attend year after year because it is a rare opportunity to be with an intimate group of advanced practitioners, to learn from one another and to share your wisdom.

Benefits of the Weeklong

The Weeklong can reinvigorate or launch your work, and strengthen the foundation of your life-long participation in our global Focusing community.  It is led by a Facilitation Team of Coordinators from different countries and backgrounds.  They are supported by several Collaborating Coordinators, and together this team creates an event rich with learning and sharing.

At the Weeklong, you will deepen or learn new skills, connect with others through common interests and experience a variety of cultural perspectives. There are also ample opportunities to share your skills and your particular Focusing approach. Your participation makes you a part of this rich legacy of Focusing and The International Focusing Institute 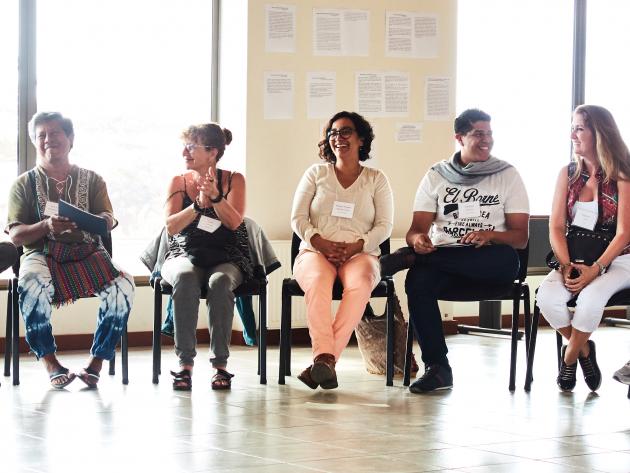 At the Weeklong, you will gain:

At past Weeklongs, people found they were able to more deeply discover themselves, their gifts, and their aliveness through the experience of deep connection in a profoundly accepting and supportive community.  For those who remain connected, this community can continue long after the week is over. The Focusing Weeklong is not just about deepening our understanding and practice of Focusing, but deepening our understanding of ourselves and what we bring to the global community.

Features of the Weeklong

Plenaries: Each day features a plenary, led by one of the three Core Facilitators.  For online Weeklongs, the main presentation will be offered live but will also be recorded.

Home Groups: These are groups of not more than 15 people, facilitated by one of our Facilitation Team (or a Coordinator who has volunteered to lead one).  Home Groups are one of the most important elements of the experience of the Weeklong.  They give you a chance to form deeper connections with an international small group and to process what you're experiencing during the Weeklong.  Each will differ slightly based on the personalities of the leader and the group, and each will include Focusing time, sometimes as a whole group and sometimes in dyads or triads.

Certification Ceremony:  We always finish our week in celebration of those being certified, and anyone present who is becoming a Coordinator. It is a warm and intimate event, and the highlight of the week for many. During the certification ceremony, whether you are being certified or not, you will be able to locate yourself and your teachers in the history of the Focusing movement on our Focusing timeline.

Online, we have so far always been able to offer simultaneous translation to Spanish.  For in-person events, we will arrange for translation when 4 or more participants require it.  We have had translation into many languages in the past, including Japanese, Korean, Chinese, Spanish and more. 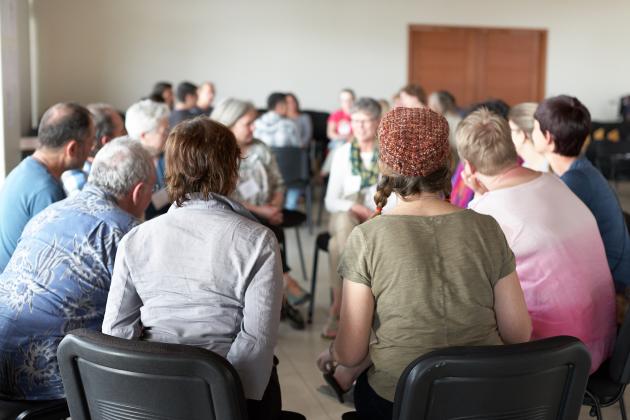