The Eugene T. Gendlin Center for Research in Experiential Philosophy and Psychology 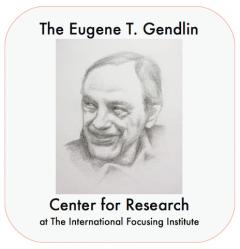 The Eugene T. Gendlin Center
for Research in Experiential Philosophy and Psychology of The International Focusing Institute

Shortly after Gene Gendlin’s death in 2017, the Board of the Institute passed a resolution to create an initiative within the International Focusing Institute to promote high level academic research to build on Gene’s legacy. While we normally say the "Gendlin Research Center" or the "Gendlin Center," the full name is The Eugene T. Gendlin Center for Research in Experiential Philosophy and Psychology.

The Gendlin Research Center consists of a distinguished group of academics in philosophy and psychology, all experts in Gendlin's work as well as in their broader academic field.  They meet monthly to further the purpose of promoting academy-level research based in the work of Gene Gendlin.  See below for members of the Steering Committee.

Thanks to generous donors, the first major initiative of the Gendlin Research Center has been the Gendlin Grant for Original Research in Psychology. So far, two researchers have received grants for important research which will ensure that Focusing becomes more widely recognized as an evidence-based modality.  See below for more information on these two grant recipients.

"Saying What We Mean: A Symposium on the Works of Eugene Gendlin" is the second major initiative of the Gendlin Research Center.  The first Gendlin Symposium took place in cooperation with Seattle University in April 2021. The second one will take place online September 28 - October 1, 2023.

The Eugene T. Gendlin Center for Research in Experiential Philosophy and Psychology (Gendlin Research Center for short) is delighted to announce a new prize for young scholars in philosophy.

The Gendlin Research Center is a division of The International Focusing Institute.  Its purpose is to encourage high level academic research based in the work of Dr. Gendlin.  Eugene Gendlin received his PhD in Philosophy from the University of Chicago in 1958 and served as an associate professor in the departments of Philosophy and Comparative Human Development at the University of Chicago from 1964 until 1995.

The Gendlin Philosophy Prize of $500 will be awarded to the best paper regarding any aspect of Gendlin’s philosophy or writings.

The paper should be a maximum of 2,500 words, exclusive of citations (approximately 20 minutes when read).

The paper must substantially address Gendlin’s philosophy.  An exhaustive listing of his works can be found at the Gendlin Online Library on the website of The International Focusing Institute.

The purpose of the award is to help generate interest in Gendlin’s philosophy among young scholars.  Therefore, the author of the paper must be a current graduate student in philosophy or have received their Ph.D. in philosophy within the past 4 years.

We are open to your questions and happy to advise you.  Please contact us with questions at [email protected].

Papers are due by June 1, 2023 and must be delivered as both a Word document and a pdf and emailed to [email protected] with the words “Philosophy Paper Submission” in the subject line.  Decisions will be made by August 1, 2023.

The recipient of the 2020 Gendlin Grant for Original Research in Psychology: 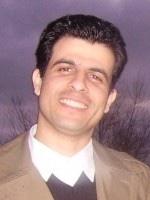 The Eugene T. Gendlin Center for Research in Experiential Philosophy and Psychology is proud to announce that Dr. Mohamed Altawil has been awarded the second Gendlin Grant. Dr. Altawil, a clinical psychologist, is the Founder and Director of Palestine Trauma Centre (UK) and visiting lecturer at the University of Hertfordshire, department of Psychology. Dr. Altawil will be studying the efficacy of the Gaza Focusing Intervention for combating Post-Traumatic Syndrome Disorder (PTSD) in Gaza, Palestine.

The Gendlin Research Center committee was very impressed with the rigor of the study designed by Dr. Altawil and the inclusion of a control group in order to validate findings.

Here is an excerpt from his application for the grant:

“Over the last 70 years, war and conflict have vastly influenced the lives and well-being of Palestinians living in the Gaza Strip and the West Bank. Giacaman et al. (2004) established that the restrictions on the liberty of young Palestinian people under occupation in the West Bank... have dramatically impacted adolescents’ wellbeing, development and education….

Every analysis of interventions on individuals and communities who are experiencing and observing war and conflict on a daily basis should always have those people’s needs, dignity, culture, honour and resilience as the focus of attention.

With all the above in mind, this study aims to assess the impact of the Gaza Focusing Project among 500 traumatized people in the Gaza Strip by using pre- and post- assessment via PTSD Scale (a validated and published scale)."

Thank you to all of our generous donors for making the second Gendlin Grant possible.

"Saying What We Mean: a Symposium on the Work of Eugene Gendlin" was offered by the Departments of Psychology and Philosophy at Seattle University, in partnership with The Gendlin Research Center of The International Focusing Institute. The name of the symposium comes from the recently published collection of Gendlin's essays, Saying What We Mean. This extraordinary collection, edited by Edward Casey and Donata Schoeller, brings together a series of essays demonstrating Gendlin’s creative and insightful ability to balance conversations across a wide range of voices in philosophy and psychology.

Gendlin had a unique capacity for thinking “at the edge” of conceptual formulations. He was able to discover, in words and concepts, an evasive connection between idea and experience. Gendlin sought to open up phenomena by exploring ideas that can only be thought in the mode of embodied practice. Gendlin’s hope was that he might awaken an appetite in his readers, a yearning to understand how “the experiential side always exceeds the concepts.” In this regard, Gendlin invites expansive efforts to explore embodied thinking and experiencing.

The Eugene T. Gendlin Center for Research in Experiential Philosophy and Psychology was created in honor of Gene Gendlin to promote high level academic research that builds on the work he did in philosophy and psychology, as well as encouraging interdisciplinary work. Currently, the Center's primary goal is to promote quantitative research in psychology that will demonstrate the efficacy of Focusing.

See details: Thinking at the Edge in Academia

To donate to the Gendlin Center, visit this page.