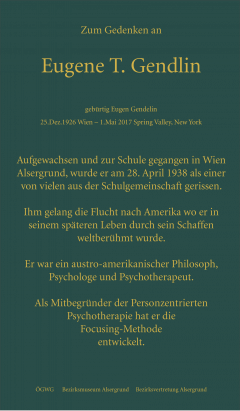 On May 2, 2018, a year and a day after his passing, a ceremony was held unveiling a plaque in Gene’s memory in the Alsergrund district of Vienna. The plaque is at the Erich Fried Realgymnasium, the school which Gene was attending when he and his family had to flee the country.

Lore Korbei, a resident of Vienna and a Coordinator with The International Focusing Institute, arranged for this plaque and ceremony, in cooperation with the Executive Board of the ÖGWG (one of the Austrian Societies for the Study of Client-Centered Psychotherapy) and especially its chairwoman Brigitte Pelinka. Lore was the person who interviewed Gene about his escape from the Nazis, the transcription of which can be found in the Gendlin Online Library.

In 1996, Gene attended the World Conference for Psychotherapy and the meeting of the University of Vienna’s Institute of Phenomenology. At that time, Lore accompanied him to visit his school for the first time since he had fled. She recalls that "the smell of the school brought back to him ‘the Felt Sense of all of this,’ and he leaned over the staircase for a few minutes, speechless.”

Having grown up and gone to school in Alsergrund, Vienna,
he was one among many torn from his school community on April 28, 1938.

He managed to escape to America where in his later life he became world famous through his work.

He was an Austro-American philosopher, psychologist and psychotherapist.

View the plaque here (in German).

Speakers at the ceremony: